Hello! So, tomorrow Friday is the end of the twins’ first week going full time into school. In the title of the blogpost I say “or two, really”, as this is their second week, but the first week was only a settling in week, going just a couple of hours a day.

So, if you are reading this, and you have a child or children going to school next year, or soon, and you have been told that they will have a soft introductory week, just a couple of hours a day, then make sure your kid(s) go in the morning. Our sessions were in the afternoon (1-3pm) and the week felt so long! I took the kids out in the mornings, but you couldn’t really go anywhere far, as I had to be back home by 11:15 at the very latest so they could have their lunch (they are not fast eaters), put on their uniforms and WALK to school.

Our school has got a no drive in policy and there aren’t any practical parking spaces nearby, so we really had to walk. In a way it was very interesting, as I got a “taste” for the “school-gate” chatting to other parents and meeting people, etc. However, what is basically a 10 minute walk, turned into a 25 minute walk with the kids(!!!)

So the first week went without any major hiccups. They were separated in different classes as I said in my previous post, but to be honest, the twins did not seem to mind at all. It’s not a subject matter they have brought up or even mentioned. They talk about their individual teachers and they don’t seem to mind at all – so that’s a massive weight off my shoulders!

Now, this week has been the real game changer, though. I happened to start a brand new full time job on Monday too, so we had to drop them into Breakfast club before school. (For normal school they had to be in the class at 8:55, but I have to be in the office by 9, so not enough time – so we signed them up for breakfast club). After school they have also been attending After School Club, until I leave the office at 5:30 and pick them up then (I’m at the school at 5:50 at the latest normally)

But yeah, the main thing about this week is HOW EASY it’s been to get them out of the house into the Breakfast club at about 8:20 in the morning, when this was practically impossible when they were going to nursery. Every morning Elisa asks if they’re going to breakfast club and when I say yes, she gets all excited! Amazing!

And they are also loving the after school club. They don’t talk so much about what they do in their actual school time, or even what they ate or anything like that, but they have settled very well and are happy to go every morning, which is the main thing making my life so much easier.

So, yeah, that’s it. Kiddos all settled and happy in school, not stressing about being late (we were almost late on the first morning of going full time – we left the house a bit too late and we had to basically run dragging the twins behind. For the following day we took them to breakfast club, so stress over). 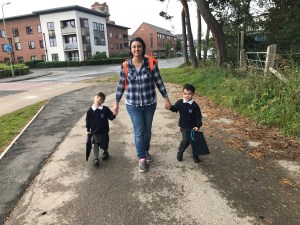