Hello! and apologies for being so late with this post! Life is just so busy at the moment in my crafting world that I completely forgot about updating this blog!! But here I am with a quick life update and also a “favourites” special.

I thought that the terrible twos were bad and the “threenagers” period was worse. Nobody ever mentions anything about 4. So somehow I thought that the moment they turned four years old everyone would chill out and have a much more relaxed attitude about things. WRONG! The tantrums and the power struggles are as strong as ever, and both of them -but specially Eric- are going through a “lying” phase, where they just lie and contradict you for the sake of it.

Bedtimes are relatively easy at the moment. They have a bath, put on their PJs, have a bedtime snack (banana for Elisa and apple for Eric) and then I read stories until it’s time to say night night. More often than not, one of them will have fallen asleep whilst I am reading. But it doesn’t happen too often. I used to read until both of them fell asleep, but they saw this as an opportunity to stay awake. So now I read the stories, three or four of them, and then I say goodnight and leave them to settle to sleep. We have had a couple of times where they didn’t want to be left alone in the room, or were “scared of the dark” (despite the fact that they sleep with a mahoosive night light), but more often than not they settle quite well. The bad news is that bedtime is very late for them. They never get in bed before 8:30 pm, and we rarely stop reading stories before 9:15. Having them both asleep by 9pm is quite an accomplishment these days.

Jon and I have a rota that works quite well. One night he puts them to bed (does the whole routine with bath, etc) and I tidy downstairs (kitchen and living room). And the following night we swap. This way we can both have one-to-two time with the twins, the house gets tidy(er), and the person who is not putting them to bed can go out to see friends, meetings, etc. This works quite well most of the times, however if one of the twins decides to have a meltdown, the parent who has the “free” night has to come to help. Not the end of the world, though.

Elisa still loves food almost as much as she has always done. She still eats quite a lot, although sometimes she has spells of only picking on food. Eric’s appetite changes so much! Some days he devours everything we put in front of him and demands even more. Some days he just is not hungry! At nursery they both eat quite well, and one of the carers told me recently that Elisa told her that she loves lettuce and cucumber, and the carer was so proud because as she said, the other kids only ever tell her that they like burger and chips (which Elisa also likes, don’t get me wrong, but she IS a big salad fan)

I haven’t weighed them for a very long time so I have no idea how heavy she is! I suppose I need to find out soon, as they are going to be growing out of their car seats soon! :/ She is 100cms tall and I only know this because I measured them on their dinosaur thingy.

She wears size 4-5 clothes and her shoe size is 9. She still wears a nappy at night, and not sure she is ready at all to remove it any time soon.

She is very athletic, she loves to run and jump, she is very giggly and happy. She is still very shy with strangers and takes her time to warm up to other people.

Same as Elisa, I haven’t weighed them in a long time. But he is 1.35m tall and wears size 4-5 clothes and size 9.5 shoes. He is very thin so some of his trousers seem to fall off all the time.

He is also happy and loves rough and tumble play with Elisa, but he seems to be a bit more sensitive and he is definitely more “dreamy”. He is not athletic at all, in fact he is a bit clumsy.

We had their birthday party a couple of weekends ago and it was a total success. It was held at a café called More of the Good Stuff in Dummer, and the lady who runs the place organised a cracking party. It was pirate themed and there were lots of games and crafts to do. The kids had a very good time and the cake was delicious! 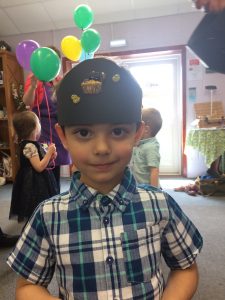 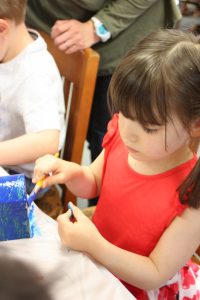