Hello! Well, apologies for the lack of updates lately! This is the longest gap I’ve ever had in the blog. I’ve meant to sit down to write a few times but it’s been a busy couple of months. Really busy. So let me explain…

For the first time ever the twins went trick or treating for Halloween! They had such an amazing time. Elisa specially loved it and she wanted to keep trick or treating into the night! We stayed fairly local around our road and nearby ones. We used the same costumes than last year at nursery (spider ones) and they were ever so polite saying trick or treat and thank you at every house. We will definitely do it again next year… much more fun than staying at home opening the door for other children!

We spent a long weekend in Ratley with the grandparents in November and that was really nice. The kids really enjoy spending time in grandma and grandad’s house and they behaved so well. We spent quality time with their cousins, whom they love, and attempted to watch their first fireworks display. They were ever so excited about their first ever Bonfire Night. Unfortunately they refused to wear noise cancelling protectors and it was way too loud for them… and cold! It was freezing cold standing on that field. So half way through they had had enough and went back to grandma’s house to the warmth of the fireplace.

As I said, they really had a great time and behaved very well, however when we came back home after the break the twins were not so well behaved at all! We had a few power struggles and misbehaviour in general. If only I had known that that was the prevalent mood to come for the next couple of months!!

The run up to Christmas wasn’t too bad, although we also had our good days and not-so-great days. Jon had to work nights for a few days and I was pretty much on my own with E&E, which was not cool – but we survived. I know that there are millions of women who bring up their children without a partner or any other help and they manage just fine, but I’ve become too reliant on Jon’s help, and doing the morning and evening routines on my own was tough.

And speaking of morning routines… One of our biggest struggles at the end of last year was the morning routines. Little by little the times kept slipping and we wouldn’t get to nursery until 9:30 at the very earliest. Sometimes even closer to 10:00. So Jon and I have decided that things need to change now in the new year. Earlier bedtimes and earlier wake up calls, and see how that goes! Also no telly until they are dressed and breakfasted on nursery days. And if they are ready with plenty of time, THEN and only then they can watch something short.

But, onto happier things… Christmas was quite good. On Christmas Eve we had our now traditional Comida de Nochebuena. I didn’t find any langoustines in the shops but we had lobster and crab and other really nice things. I knew the twins would not eat any of the seafood so I made them a separate dinner. Once they had eaten Jon and I sat to eat at the table and E&E joined us! It was quite cute. They played with the lobster claws and we had a great time. On Christmas morning they opened their presents (all bar the new bikes) and drove to grandma and grandad’s house where we spent a few more days. Again, they behaved quite well whilst we were there and had a great time with their cousins. (We decided it wouldn’t be fair to give them brand new bikes and then not allow them to use them as we were leaving for G&G’s straight away and we couldn’t take them with us either!)

After we came back from Ratley, we spent a few days at home before flying to Spain in the new year. Our stay in Motril wasn’t too bad this time, quite nice really, however the fact that they do not speak or understand much Spanish is now very noticeable and I’m sure my family weren’t impressed, although they didn’t say much about it to be honest. The weather was quite mild, although we still needed coats to go out in the late afternoon. When it was sunny, it was beautiful and you could just do with a long sleeve tshirt. However my mum’s house was so cold! It’s funny how we forget every year…

The twins really enjoyed the Three Wise Men parade. At the beginning they were only picking up sweets if they fell by their feet, but after two or three floats, they were running around picking up sweets from everywhere. I tried explaining the concept of the Three Wise Men without any religious connotations and I’m not sure they picked it up or cared much about it. The important thing is that the enjoyed the parade, the sweets, and having more presents to open the following morning!

Fun thing happened in Spain… Elisa got head lice!!! Actually, it must have happened here in the UK but we only noticed once we were there. Jon spotted Elisa scratching her head a bit too much and on closer inspection we noticed the little buggers! Off to the pharmacy to buy a comb and some special product, and 10 minutes later we were all being treated. It turns out only Elisa had anything, neither Eric, Jon or myself had any eggs or lice, but we had the treatment anyway just in case. Elisa has been a star these days, allowing me to comb her hair everyday to make sure all the lice have gone.

Today was the first day of the twins going back to nursery after the break. It wasn’t easy. Actually, it was a bloody nightmare… no need to be politically correct, it’s my bloody blog! Eric decided he didn’t want to go, so he wouldn’t put on his shoes, or coat, and we just had to forcibly carry him into the car and force him into the car seat. He didn’t stop crying the whole journey and once at nursery one of the carers had to help me convince him to put his coat on to go out into the garden. He did not want to be there. Full stop.

So yeah, we need to stick to our plan of starting the days early. One of the reasons why these last couple of months have been tough is because they are also going to bed later and later. In addition to that, Eric does not like sleeping on his own bed and he will insist on going to bed with me. So really pants period, honestly!

I am really hoping that giving them a new bedroom with “big boy and big girl” beds will make the situation better, but at the moment I am feeling quite negative! And speaking of the new bedrooms, the extension has been done for a while now. I think the builders left around early/mid November and then it took Jon and me a few days to do all the painting in the new rooms upstairs. Jon then attempted to do the stairwell but it proved a bit too much work, so we contacted a painter and decorator who is coming next week to do everything else (skirting, doors, stairwell, etc). Now we need to get some carpet and furniture! I didn’t think that it would take us as long as the actual construction of the extension to get it all done, but it is so hard to get anything done with the kids around!

And I think I’ve covered everything! These are being tough times in the household, with lots of challenges being thrown at us, but we will survive! We always do…

And to finish with, I leave you a photo of the twins opening some of their Three Wise Men presents. 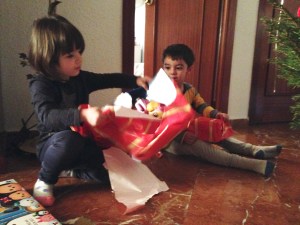