First of all, apologies for the delay with this post! I always aim to publish the twins’ monthly update around the 16th-20th of the month, but because I had already posted two other entries this month, I kind of left it too late! But here it is…

The newest thing in the life of the twins is that they are now scared. Scared of the dark, more often than not. But also scared of “monsters”, “aliens”, etc. For the last few days we’ve had to leave the bedside lamp on for them to sleep with. The first night I turned it off a couple of hours later, but then Eric woke up in the middle of the night and wouldn’t go back to his bed because it was too dark and got scared. I don’t know if it’s a coincidence but when we’ve left the light on all night, we haven’t had any incidents of the sort.

And have I mentioned Paw Patrol? It’s the latest craze! Long gone are the days of Peppa Pig and In the Night Garden. To be honest, apart from every episode being pretty much the same as the last one, Paw Patrol is pretty harmless. A bit annoyed that the ratio of male / female dogs is not more even, but hey, we’ll get there… We had a little stint with a cartoon called Max & Ruby which both Jon and I hated. But after realising that Eric had started imitating Max and talking with pretty much monosyllables and single words, we decided to pull the plug. No more Max and Ruby in this house. Thanks.

We’ve been out and about a bit this month, with visits to Alice Holt forest and also we paid a visit to Manydown for the pumpkin carving event. The twins are loving autumn, with all the brown leaves and looking at the mushrooms and all of that. However, it is getting harder and harder to convince them to go out. We have very lazy routines, with chill out breakfast in front of the telly and not getting dressed until mid morning or later at the weekends. So when we have something planned, or even if we just fancy going for a walk to the shops, getting them out of the house can be a bit of a challenge!

Both Eric and Elisa have had colds this month (and daddy too!) and they had their pre-school immunisations earlier this month. We have also booked them to have their flu vax next week. Other than that they’ve been quite well within themselves. Eric has been doing better with not wetting his bed at night, however it is still hard to convince him to go to the toilet before bedtime… Elisa still uses a nappy for bed.

And this is it for now. A very short update this month, I know. But I will have much more to tell next month, with Bonfire Night and spending a few days at the grandparents. And an update on the loft extension and applying to schools.

I leave you with a photo from the pumpkin carving event from last week. 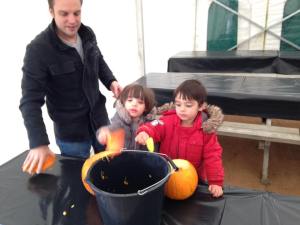