Let me cast my mind back and remember about the last month. I don’t know exactly why, but I really can’t remember much of what’s happened since the last update!

The loft extension is going quite well. The builders are really nice blokes and it’s almost as if they are not here. I suppose it’s because I’ve worked in building sites before, but the noise is not really bothering me that much. I mean, sometimes it IS noisy, but nothing unbearable!

The twins are very excited about it too. We told them that they were going to get a new playroom upstairs and they are really looking forward to it. From time to time they ask whether the builders have finished yet and they have shown quite a lot of interest in the scaffold and all the other stuff around us at the moment. They even want to go up and have a look! But we will have to wait until they have at least installed the staircase and opened the whole in the ceiling.

Once again, we have socialised a bit this month (birthday party and other outings) and the twins have taken their time to settle in with their “friends”. It already happened last month, and although I understand that these are very big changes for them and they need their time to feel comfortable, at the same time it can be a bit annoying, because by the time they have settled and are happy playing it is time to pack up and go!

Mummy has also had a bit of socialising this past month, which has meant that daddy has looked after Eric and Elisa on his own quite a bit. I stayed away for the first time in three years and four months for one night just a few weeks away and it was great. It was great for me because I got lots of ME time that weekend and it was also great for the twins for be away from me for a while. A bit of a downside of this is that since I came back (after just 24 hrs away) they have been very attached to me. But that’s ok 🙂

Health-wise, they both have had a cold for almost a week now. Elisa has been worse off, with lots of snot and coughing. Eric seems to just be snuffly. Thankfully, it hasn’t really affected them at nursery and they’ve been sleeping quite well, so no drama.

In a couple of weeks we are going to spend a long weekend in Norwich for Jon’s cousin’s wedding. We will be staying at a cottage that one of Jon’s relatives has very kindly offered for us to stay. The only “problem” is that the twins will be sleeping in big single beds! We have sourced a couple of bed guards to borrow, but in addition to this, Jon and I have decided that it is time to remove one of the sides of their cots, so they start getting used to having one side open. A lot of people are telling me that it’s going to be okay and they won’t fall off the cots much, but if they do, at least I know that they are very near the floor and they won’t hurt themselves. Doing this will be some sort of training for when we go to the cottage and for when we stay with grandma and grandad, as they now have a big bed for the twins too!

And there is another topic that I want to talk about… Schools! But I will leave that for a new post as there is a lot to tell.

In the meantime, I leave you with this very cute photo of Eric and Elisa playing at “the block”* just the other week.

(* the “block” is the green behind our house. After dinner sometimes we go out for a walk in the neighbourhood, and we say “let’s go for a walk around the block” and we always end up in this green, so now the children think that the name of the green is the block, so they always refer to it with that name – super cute.) 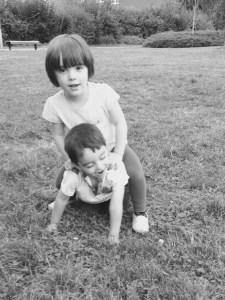 View My Blog Posts
« The Loft Extension
Out and about with the twins, Part 2 »