It has been a difficult month. The twins have been very argumentative and fighting a lot with each other. They seem to have found extra levels of energy out of the nowhere and it can be very tiring (for me!)

So what’s happened this month?

They are officially pre-schoolers now! At the beginning of this month they were moved from Bumblebees to the Dragonflies room. The move went very smoothly, as all of his friends from the previous class were moved as well, so they are not missing anyone. So we didn’t get any crying, or tantrums wanting to go back to the other room (like we did when they moved to Bumblebees)

The main carer in the new room is a girl called Michelle. She actually lived in Spain for a number of years so she speaks good Spanish (with a thick accent, but Spanish nonetheless!). She’s ok, I like her. I still need to get to know her a bit better, but from what I’ve seen so far she’s ok. She’s no Anna. I am missing Anna already, but will have to live with that.

In the new preschool class there are no naps! So where Elisa and sometimes Eric would choose to lay down after lunch in the Bumblebees room, this is not an option any more! However, I haven’t noticed that this has affected them in any way or form.

As I said above, they seem to have found super strength and energy from somewhere and they are very active when they get home after nursery or in the days that they are at home with us. A couple of weekends ago, we took them to Manydown Family Fun (we bought season tickets) and we got there at 10:30 in the morning but didn’t leave until 4:30pm! And from there we went to a restaurant for dinner (since all that running around made us super hungry) and even then they were still not tired!

In other news, their speech is fantastic and they both hold long conversations and they tell you about everything that they’ve done that day. It’s also worth mentioning that they both have an amazing memory! They can recall things that we did weeks ago, they even tell us things from our visit to Spain over a month ago! It was so funny the other day when I went to pick them up from nursery and the carer asked me “do you fly with Easyjet?”, to which I responded “yes, why?”, “Oh, because the twins have been telling us that the plane that you flew to Spain in was all orange”. Isn’t that hilarious?

Something I’ve noticed, especially with Elisa, is the use of past and future in her sentences. It took me a day or two to figure out what she was going on about, but in the end I got it. And what happens is that when she wants to refer to an event in the past she always says “yesterday”, and when she wants to refer to an event in the future very often she will say “tomorrow”. So when I try to correct her and say, for example, “not tomorrow because you have to go to nursery”, she looks at me puzzled. Not sad that I just told her no, but puzzled as in “I don’t mean tomorrow tomorrow, but tomorrow in the future”

In the potty training adventures, we have had lots of success and also some regression. Eric hasn’t had a nappy at bedtime for weeks now but we have had two accidents just recently (good thing we bought mattress protectors!). Elisa still wears the nappy at nighttime and she needs it! It is always so full in the morning! The problem with Elisa is that she tries to hold her wee for way too long (during the day) and she always ends up wetting her panties. Some days we go through three or four panty/trousers changes and it can get very tiring.

With Eric the problem is that he refuses to go to the toilet before bedtime. They still drink a full bottle of milk at night time, so if he drinks it all I know the chances are much higher for needing to pee in the middle of the night. If he only drinks a bit of the bottle, I know he can make it until the morning without any accidents. Unfortunately, he probably wees himself in his sleep, and only wakes up once he is wet. He has no control to wake up and call for us to take him to the toilet before it’s too late.

Socially, we have seen quite a few people lately, and they have been angels! (funny how they can be angels when we are with other people but can be nightmares when they are just with me!). Just yesterday, for example, we met up with some of the NCT girls for a picnic in the back garden on one of their houses. At the beginning the twins were super shy. They just sat there, eating their picnic food, looking at the other children and basically keeping themselves to themselves. However, after an hour or so, they warmed up to the other children and ended up having an amazing time. Elisa “fell in love” with Dexter, whom she kept calling “Vector”. They played so nicely together and by the end of the day they were best friends.

And this is it now. We have news regarding our house, but I think that deserves a whole new blog post. 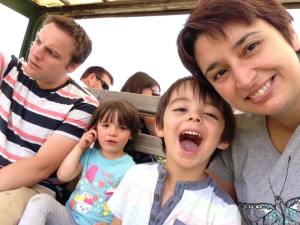