Oh man, I think I’ve lost the count…. This was the twins’ fifth? visit to Motril and here’s a brief review 🙂

We left Basingstoke at 5 am after having a very good waking up from the twins, who were super excited about going to the airport. Traffic was fine at that time of the morning, so got there with plenty of time. Once again, we chose Meet and Greet for parking at the airport. This time, however, we went with a different company, and we had to park slightly further from the usual place. At the beginning I was a bit annoyed about this however it was fine in the end, as we walked straight into the brand new Easyjet check in hall. Gatwick North Terminal has been going through some major updating since the last time we flew in January, and both Jon and I were very impressed with all the upgrades. The Easyjet check in hall, for example, is genius. Huge hall, full of automatic check in machines, that do the job three times faster than if they were manned. Hardly a queue in sight, so much more efficient!

The flight was good, although it was a bit delayed. We didn’t have any tantrums from the kids for not wanting to put their seatbelts on like last time. We had a couple of “fights” over who got to sit with mummy but nothing that couldn’t be handled with a bit of bribery.

Well. What a massive cock up. So many wrong things with this.

First, the queue at the car rental desk was huge. Jon managed to get there pretty fast, but there were still like maybe 10 people in front of him. On top of that, they had some problems at the desk which meant they had to do lots of the transactions by hand because the computers weren’t working. What!? The kids were great, as usual, and very patient. They played very well even though they were tired and wanted to go as much as I did. In addition to this, it was hot! We felt the heat straight away, but that didn’t stop them from running up and down 🙂

Secondly, the car they gave us had broken seatbelts at the back, which meant we couldn’t properly strap the booster seats(*), so Jon had to run back to the hall, jump the queue and ask for a different car. It worked out well because the new car they gave us was much nicer and comfortable (there was a slight scent of cigarette in the first one which would have annoyed me to no end if we had had that car during the whole holiday)

And talking about booster seats… When booking the car online, we chose “booster seats” despite the photo showing a normal high backed booster seat. However, they only gave us a booster “cushions”, with no back, and no other method of strapping other than the normal car seat belt. This meant that the twins weren’t properly protected, and when they fell asleep in the car the got in the most uncomfortable positions. Jon asked to swap them, but they wanted to charge us an extra £100! If we had known that the cushions were going to be so uncomfortable for the twins we would have paid the extra money and change them, but then and there we had no idea. To make it worse, when we got back home and saw the invoice from the rental company, we decided to look at how much those cushions cost brand new (of stream of thought being, we buy them ourselves and the twins can carry them as their hand luggage), only to find out that you can buy them for £6 each new!!! They charged us hundreds of pounds for something that you can buy for less than a tenner!

And to finish it all off, we were hit by a car, leaving a massive scratch on the rear bumper. It happened whilst the car was parked so we didn’t see anything. Really annoying, though, because my uncle spends a lot of money on that car park so the car is somewhere safe, only to be hit (twice, actually!)

It was lovely and hot, exactly what we were looking for! After a rubbish “summer” in the UK a bit of heat was perfect. I spent a lot of time “complaining” about the hot weather (my body is not used to those temperatures any more!) however in reality my body just appreciated it!

The twins took a long time to get used to the new place this time. I think the older they get the harder they are going to find it, simply because my mum, uncle, brothers, etc, are almost like strangers to them and they are not very good with strangers! I wanted to say that they took ok to the weather, however, a side effect was that they hardly ate anything (other than ice cream!) and sleeping wasn’t great either.

The positive side, though, was that we went to the beach quite a lot and the children absolutely loved it. They found the sand very hot, so the beach shoes that grandma and grandad bought for Cornwall came so handy. The temperature of the water was quite nice so they also played by the shore quite a bit, although they didn’t venture into the actual sea. A bit too early for that! But yes, the beach was a great success.

We also went to the playpark a few times and found a soft play area. In both places, it took them quite a while to loosen up and get going with the playing. In the soft play, the place provided an entertainer so the parents can sit back and let them play (something very Spanish, by the way. You will very rarely see your average Spanish parent getting dirty in a soft play with their child). The twins however did not want to know about the entertainer at all. They wanted mummy and daddy to join in, like they are used to (so Jon had to go back to my mum’s house to get socks for us…)

This time Jon and I didn’t get much of “us” time in the evenings. As I said above, the kids did not sleep very well, so going out in the evening was a no-no. We went out one night with my brother, but half an hour into out outing, my mum called me on the phone because Eric had woken up and there was no way to settle him back. When I got home (only a few minutes later, we were really close) Eric was inconsolable. Bless him. He just wanted a wee, but my mum didn’t understand him!

And talking about the wee-wee. The twins are potty trained now! Elisa still needs a nappy for bedtime, but Eric hasn’t had one for a good week now and there haven’t been any accidents! (We’ve put a mattress protector down anyway, just in case)

And not much more to tell. We ate lots of ice creams, we went to the beach and the park, they jumped on our bed (it’s really bouncy) and had an overall ok time. It hasn’t been our best visit yet, but we’re hoping that it will get better.

The journey back was pretty uneventful. The only thing worth mentioning was the CHAOS that Malaga Airport was. Huge queues for checking in, huge queues for security control, queues for passport control… We stopped at a shop to buy some drinks and snacks, but we didn’t even stop to eat them, we just carried on walking to the plane (by the way, 17 euros for a bottle of water, two juices and a danish). By the time we got there the plane was more than two thirds boarded! (And we had arrived at the airport with more than plenty of spare time).

And here are a couple of photos 🙂 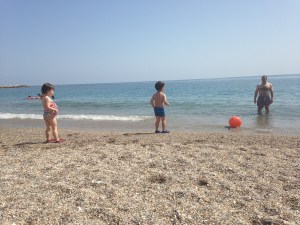 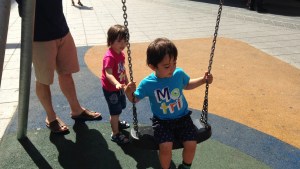 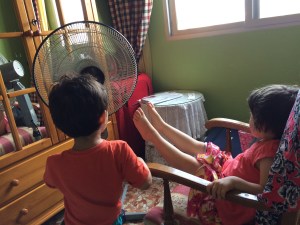