So, after two years of very low key parties, with just the family in our back garden, this year we decided that we wanted to do something a bit more special for them.

The original plan was to hire the hall at the community centre and get a bouncy castle, and do something small but fun for them. However, the community centre was booked for almost every single weekend around the date that we wanted to throw the party, so we had to look at other options. In addition to this, I decided to throw the party alongside my friend Alex, whose daughter Maria turned three the day before the twins.

We ended up choosing Playdays, which is a soft play centre here in Basingstoke. We could invite a total of 30 kids, but my list was pretty short (8 kids in total!) so Alex filled up the remaining of the list with her friends. We also went for a Mickey/Minnie Mouse theme, as we didn’t think that a full-on princess or superhero would be suitable for the twins (plus, I would have completely refused to do a princess party anyway)

We originally booked the party from 1pm to 3pm, but after thinking about it, I thought that it was a very awkward time, as we would be being served the food at 2:15ish, which is too late for lunch but too early for tea. So in the end we decided to move the party to the morning slot, from 10 to 12 (the lunch then started at 11:20 or so, which is not too early to eat, specially when most of the kids have been running around the previous hour and a half).

We had been talking to Eric and Elisa about their birthday party for a few days before the Saturday, so they were very excited when the D Day finally came. We opened a few more presents in the morning and then got ready and went to Playdays. However, once we got there, the twins got a bit overwhelmed and were a bit off-ish for the rest of the morning. I think that they must have had a very different idea of what their birthday party was going to look like. And the fact that they didn’t really know a lot of the other kids (Alex’s friends) didn’t make it any easier on them.

Still, they played quite a lot in the soft play area and then they behaved quite well during the lunch.

After we were basically kicked out (more on this below), some of our party came back to our house to eat more cake and play some more. The twins opened all their presents slowly, one by one, and then playing with each one individually, which was very nice as they didn’t go crazy wanting to open them all at once. We got lots of lovely presents, they were utterly spoilt! I think they enjoyed this part of their day more than the party at Playdays, since it was more intimate, quiet and they played quite closely with cousin Olivia and their friend Marc (their favourite friends).

All in all it was a very good day, a tad stressful in a couple of occasions, but enjoyable overall.

I am not sure I will use Playdays for birthday parties again, though. I thought the organisation was lacking and the “party host” we were given was a bit clueless. For example, they knew all along that it was a shared birthday party but they only gave us one box to put the presents in. We had to ask a couple of times, and it took them quite a few minutes to come back with an extra box. Also, they basically threw us out of the party room. Our party was booked until 12 o’clock, but we all imagined that they would give us a few minutes’ grace to pack up our things and leave. However, from 11:45 they started “warning” us that we had to leave because there was another party waiting to come upstairs. Hang on a minute, hold your horses… You can’t do that! There is no way in a million years that you can get 30 children + parents out of a room by 12 o’clock, clean up and prepare the room for the next party that starts at 12 o’clock!! Do they have Quicksilver from the X Men doing the cleaning?

Other than that it was ok, I suppose. The food was nice enough and there was plenty going around too. We also got a little present for the kids from the place and they prepared all the party bags with the cake inside.

I will definitely rethink the options for next year.

A couple of photos from the day 🙂 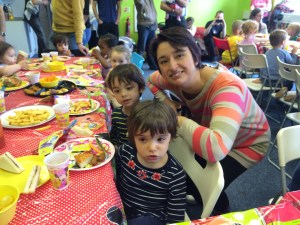 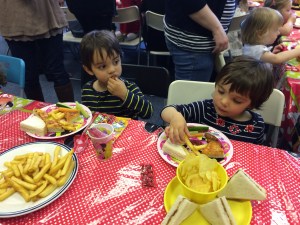 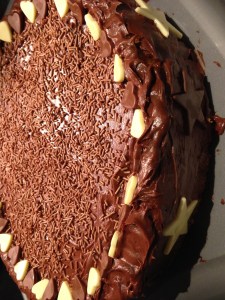