It’s been almost two weeks since we came back from Retallack but it honestly feels like a million weeks ago 🙁 So before I forget everything, I better start narrating our holiday!

The journey to Cornwall was easy enough. The twins behaved very well in the car and they only started getting a bit cranky towards the end. We left Basingstoke at 1o o’clock in the morning and got to the resort at 2:30 pm. We made a couple of toilet / snack breaks, but we never stopped to eat at a restaurant type of thing. We played a couple of games in the car, basically simple things like “let’s find all the red cars”, and when we were about one hour away from destination, I got the iPad out and watched a few cartoons (we also had a few tears, since they both wanted to hold the iPad themselves, which is not feasible since one of them would miss out then)

We got to the resort, checked in, we were given the keys to the house straight away (which was very handy, as in theory the check-in time is 4 o’clock) and off we went. The house was fantastic and the twins loved it straight away. This is the one that we stayed on: Daymer Twin.

The house has got a big decking area with a wendy house and a couple of toddler tricycles. There is also a big indoor wendy house in the living room upstairs (yes, there are two living areas!) with enough toys and books to keep the kids busy for a few days!

The rooms were big and very nicely decorated. The bed that Jon and I slept in was super big and really comfortable. All in all, we were very happy with the house.

A bit later that afternoon, the grandparents arrived.

There is a restaurant on site called the Green Room, which is really nice. Apparently it is run by a former Masterchef winner, and we found the food and service to be quite good. The first night we had dinner there and we all enjoyed it a lot. We had dinner there three times during our week long holiday and we also had takeaway pizza once. The twins absolutely loved that pizza. We were “warned” that the pizzas might be a bit too big for the twins but they devoured it! It was beautiful to watch them eating so well!

Other facilities at the resort included an indoor swimming pool, a flowrider, a “beach”, soft play, play area, a spa and a shop.

The swimming pool was really good. It was heated and never too busy. It was quite busy once with a group of mums and toddlers, but even then it never felt uncomfortable. They also had really nice changing rooms with fully stocked showers, and even a little play pen to put babies in whilst you change.

This was the first time that they twins got on a swimming pool. We also had a swimming pool last year at Glynn Barton Cottages, however they never went in as they would cry every time we tried. This time it was so different! They weren’t too scared to go in and they even enjoyed it! They liked it so much that they even asked to go several times!

The flowrider was right next to the restaurant and we could see groups of people having a go whilst we were having dinner. We left it until almost the last day, but Jon had a go and he absolutely loved it. It was quite worth the money! (not that it was that expensive at all). Jon was quite lucky to have the place all for himself too, since he went in the middle of the afternoon on a week day. The flowrider got quite busy in the late afternoon with after school kids and at the weekends.

The “beach” was one of the things that I was most disappointed about. To be honest, the whole lake was a disappointment for me, as I believed it was going to be much bigger. The “beach” was a tiny piece of sandy land in one of the sides of the big lake. It is right next to the Aqua Park, and there is a small beach bar and a fish & chip shop, however, it never felt like a place where you would actually go willingly (unless someone you knew was using the Aqua Park).

The soft play was quite rubbish too. It was very small, probably the same size as the one in Glynn Barton, but the twins are over a year older than they were when we went to Glynn Barton, so that same size is too small for them now. We went once and spent about 20 minutes. The soft play area was located inside the wet suit hire shop, so there was a very strong smell of chlorine and damp in the air too. We never felt the need to go back!

The kids’ play area was slightly better but nothing too outstanding. It had a few swings and sew saw, and couple of climbing frames and all the typical play park furniture. The twins liked it though, and we visited it a couple of times.

The spa was nice. I had a treatment there one day and it was ok, but I’m not sure if it was worth the £85 that we paid for it. It was supposed to last 2 hours, however, I was left alone in the room for two sets of 15 / 20 minutes, which made me a bit mad. I was there to have a massage, not to be left alone! The massage itself was quite nice though, I can’t complain, and my skin was proper soft for a couple of days afterwards.

The shop I didn’t even go in, as Jon went on our first afternoon there and he was completely ripped off buying some beers, so we didn’t use it again. We did get a grocery delivery from Tesco on our second day, with some basics for breakfast, etc and a few meals for when we weren’t eating out.

This time we didn’t visit as many places as when we went to Glynn Barton, but we still moved around a bit!

We finally spent some more decent time in Padstow (our first visit last year was quite a disaster). Padstow is a lovely town with lots of character, but I have seen it now and I don’t have any intention of returning any time soon. We found a quirky crazy golf place where the kids had a blast, we had ice cream at a cafe in the harbour (not good ice cream, by the way), we visited a lobster museum and we finally had lunch at Rick Stein’s fish and chips (which was delicious).

For our first beach day out we went to Constantine Bay, near Padstow. It was a fantastic beach and we had a great day out. The beach had a great rock pool area, that the twins loved exploring. We put lots of seashells in a bucket and went looking for crabs. We only saw one in the end, but it was such an interesting one! It had a lovely green shade to it.

We also visited Lappa Valley Steam Train near Newquay, which would have been a great day out, but the weather was rubbish and I was freezing most of the time and feeling completely miserable, so we didn’t stay long. However, during the time that we were there, the twins got to go in two or three different trains and they also had a go at playing crazy golf.

And finally, Fistral. We went to Fistral beach twice. The first time we went to an amazing restaurant for dinner. The restaurant is called The Fish House, and we had THE BEST dinner there. It is a small place, very intimate and family run, and so comfortable! I honestly can’t praise it enough. After dinner, we went down to the beach, where we just enjoyed a very nice late afternoon, watching the surfing schools and the locals walking their dogs. The kids absolutely loved it. So much so that we had to go back the following day! We packed a picnic and got ready to spend a lovely day at the beach. However the weather wasn’t the best, there was a very chilly breeze. On top of that, we had a small accident, where Elisa fell into the sea when she was at the shore picking up some water in her bucket with grandad. The wave just caught them by surprise! But the shock of the very cold water was too much for poor Elisa, and after that it just wasn’t the same and we packed up and went back to the house.

All in all, it was a very nice holiday. It was different from the one in Glynn Barton mainly because we went with the grandparents, which changes things slightly. But going with them meant that Jon and I could also go to the bar a couple of times without worrying at all about the kids.

By the way, the twins slept very well during the holiday, except for one night when Eric woke up in the middle of the night and we brought him to our bed (which, being so big, was not an inconvenience at all!)

Would I go back to Retallack? Yes. As much as I loved Glynn Barton, Retallack was much cheaper for this time of the year than Glynn Barton. We got a four bedroom house (with hot tub, washer-dryer, three bathrooms, and lots of other amenities) for £950. A three bedroom cottage at Glynn Barton (without many of those perks) would have been almost double that price on the same week. So, yes, I would go back to Retallack because the price is good. I give Retallack a 4.5 out of 5. That being said, I still want to go back to Glynn Barton, as we absolutely loved it there. 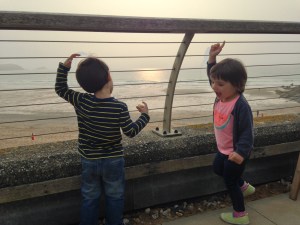 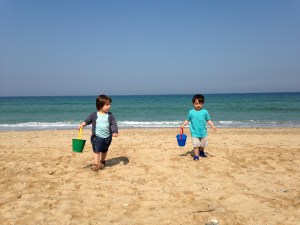 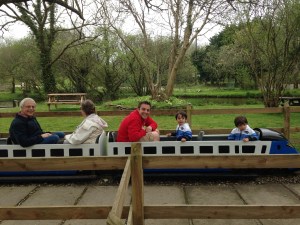