A few days late, but here is the latest update on E&E.

Eric has been going through a bit of a growth spurt and his feeding has been quite good in the last few weeks. He’s never been much of a fussy eater, it’s just that his appetite is smaller than Elisa’s. However, lately he has been eating quite a lot! He even asks for snacks and lunch/dinner, when before that was unheard of.

Elisa still eats pretty well most of the time, although she has surprised us a couple of times in the last month with not wanting to eat much at all. At the same time, she’s got plenty of “reserves” so it’s not the end of the world if she doesn’t eat one day…

Their favourite foods are still the same. Great on fruit and vegetables (they always want cucumber, grapes, melon, apples, carrots, broccoli, peas… they rarely say no to those things), not so huge on meat although they do eat enough. Rice, couscous, meat pie and quiche are also all time favourites.

We thought that we would have problems to bring their bedtime an hour early when we moved to British Summer Time, but it wasn’t much of a problem in the end. They did question us a few times, like “why are we going upstairs already when it’s light outside still?”, but we explained the best that we could that it was still bedtime, and they haven’t argued much. We do have to start telling them that it’s time to go upstairs very soon though, as they take a while to digest this piece of information. You need to start making noises about it about half an hour before you want to start the bath. And even then, they will still want to play for a while whilst we are preparing the bath and their bedtime.

They are pretty good, though, we can’t really complain. We read them 5 or 6 stories and then we say goodnight and more often than not, they will just say goodnight and go to sleep. Some other times we need to read one or two stories more before they are contented, but that’s hardly the end of the world!

Bedtime is slightly later than we would like. Most nights we close their door at 8:30pm. Sometimes even later. But at the same time, we do have very relaxed mornings, and we are rarely up before 7:30-8:00, so it is understandable. Elisa sleeps a nap at nursery most of the time although not always. Eric will sleep a nap probable 1 out of 5 times.

No. We haven’t started potty training yet! Argh! Yes, I am aware that they have been ready for a while, but I am not ready! We have bought pants and panties for them, so now we just need to take the bull by the horn and start!

They are doing lots of things on their own now. For example, they are both more than capable of putting their own shoes on (although Eric refuses to do it himself when he’s at home – he does it without a problem at nursery!). They can also take most clothes off (with a little helping hand from an adult) and the same goes to putting clothes on.

And what else… They are certainly doing very well for their age and they can do most of the things that other children their age do. Elisa’s speech has come in leaps and bounds since we took her dummy off in January, however her pronunciation could do with some improvement. I think she is so excited to be talking so much that she wants to say so many things at the same time that she forgets to enunciate.

Eric is really into books lately. So he will get a favourite book (very hungry caterpillar and the three little pigs are the two favourite ones at the moment) and he “reads” them again and again, and then he wants to watch the cartoon on tv too.

We have had a very social couple of weeks! We saw cousin Olivia a few weeks ago, and also attended a couple of birthday parties and saw some friends more recently. With cousin Olivia, they ignored each other for most part of the day and only started interacting with each other at the end, when we were just saying our goodbyes ready to leave (typical!). At Cody’s birthday party they also ignored most of the children, despite the fact that they knew a few of them from nursery! At Dexter’s party they also kept to themselves for a lot of the time, but at least they played alongside other children, rather than keeping to themselves like they did at Cody’s. Last weekend we also met with their friend Marc and that was slightly better. I suppose Marc is the friend that they see the most, and they really get on with him, so that was much better.

We’ve been pretty healthy in the last few weeks. There have been lots of coughs and sneezes and snots, but that is just normal at this time of the year, since is getting warmer but it’s not quite warm yet and we get a bit relaxed with the coats and fleeces..

So, yeah, a quick one this month. Next month they will be three years old! I think I will change the titles of the blog entries. No more counting in months! (you have to draw the line somewhere!!). We will also have our first holiday on the year next month. We are all SO looking forward to it! I just hope the weather is good enough!

I leave you with a photo from one of our many outings with the balance bikes. 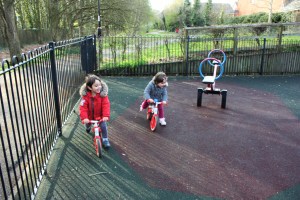