I wrote it on the aeroplane to Spain 2 christmases ago, and never posted it, mainly because I was looking for a picture of my grandad wearing nothing but a towel after attempting to jump over a small waterfall in Scotland.

But the point is, at 70-something years old, he tried.

I cannot find the picture so I hope the attached photo will give you a good idea.

There is a concerning trend which has been developing since my youth in the united kingdom;

On the one hand you have health campaigners and associations successfully lobbying new reforms in government to reduce alcohol consumption, and hide cigarettes under the counter. Newspapers and magazines run regular stories on health and the latest revelations about food additives and the effects of junk food on the heart; we are constantly reminded of the importance of exercise and avoiding saturated fats.

On the other hand we are also facing a state funded timebomb of an Ageing Population. As of today, it is currently expected that 1 in 5 English persons will live to at least 100 years old.

Now there are two obvious immediate problems which stand out to me; 1 is the cost of state pensions and health care, including general life care for an elderly person. Whether assisted by the state or the family this is, in most cases, still going to consume the sum total life accruement of said ageing individual.

Have we built such a self destructive capitalist society that wealth can no longer be grown? Must we be so clean and so healthy that we spend the last 10 years of our lives confined to chairs and bedbaths, haemorrhaging our lifes earnings sustaining a painful and indignified slow death?

What happened to burning out at 80, having LIVED? 100 is a GRAND age, which features colostomy bags, adult nappies, declining personal hygiene and a total lack of independence, mobility and dignity.

Even with good mental health this is an unpleasant way to imagine my own demise. Which brings me to point 2.

Anyone who has watched a relative suffer from failing mental health such as Alzheimers knows that it is nothing short of slow torture. My dear grandfather Eric has been sliding away for a number of years now. At age 92, he has very much reached a grand age. But his mind leaves him unable to care for himself anymore so his wife, family, and carers have to do so instead.

But you know what the worst thing is? At first he wasn’t aware what was going on, but now it is so bad he can’t help but notice his own problem.

Imagine, if you can, waking in the morning and waltzing effortlessly between blissful ignorance, and a grim realisation that something is very wrong with you, 20 or 30 times a day. It brings a tear to my eye to even contemplate the emotions he must experience everyday. Somedays he just cries; but he doesn’t know why. Sometimes he says to me “there’s something wrong with me”, to which you can only reply “there is, grandad but we love you just the same”.

But most times I have to remind him who I am, and he eyes me with a touch of suspicion, before accepting it without any genuine recollection. Until later on, when he usually forgets again.

Well, I have no intention of going out like that.

So drink, and be merry. Eat real butter, full fat milk, pizza, mcdonalds and bacon.
Stop worrying about additives and cholesterol and go and enjoy your relatives and friends now, while you still can, over a slap up meal packed with no-nos and naughty things. And have the profiteroles.

So while the Daily Mail reports on the ageing populous with one face, and how some new report finds that cabbage is bad for the heart with the other you can smile to yourself, as you scoop another spoonful of Ben & Jerry’s into your mouth, knowing that you’re one step ahead of the game. 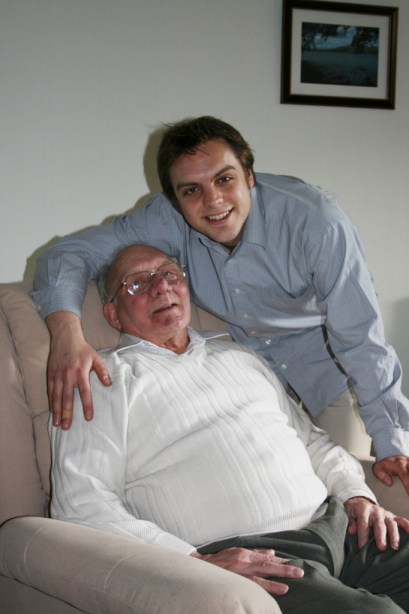